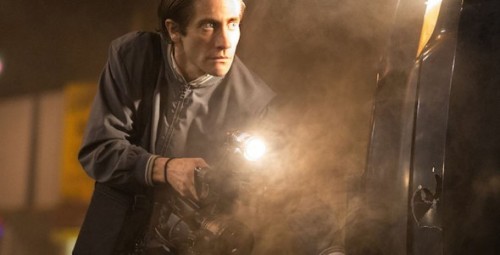 Lou on the job. 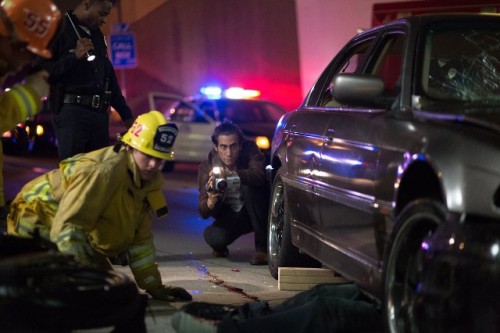 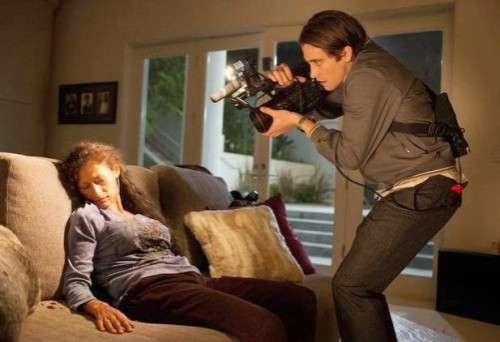 Shooting a home invasion and murder. 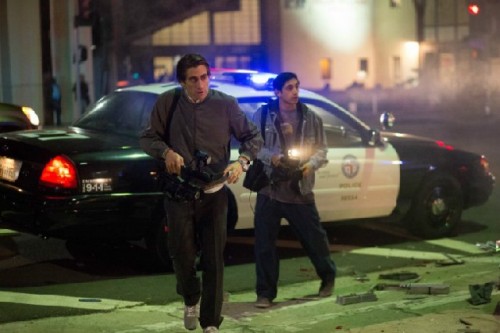 Lou and Rick move in.

The genius behind the billion dollar Bourne series of films, Tony Gilroy, the writer/ director gave an illustrated lecture on the art of suspense at Mass MoCA. It was a feature of the 16th annual Williamstown Film Festival.

In discussing the genre he included and discussed clips from his Bourne films as well as classic cuts from Hitchcock, Kubrick, the seminal Aliens, and his brother Dan’s current release Nightcrawler. Remarkably Dan, who has collaborated with Tony, is directing for the first time. Masterfully one might add.

Although Nightcrawler has a bankable star, Jake Gyllenhaal, by Hollywood standards it is a relatively low budget film shot on location in Los Angeles.

Tony discussed all of the limitations and constraints leading up to the climatic, suspenseful scene in the movie.

The action occurs in a glass walled, Chinese restaurant in LA. The location is so perfect that he wondered why it hadn’t been used previously.

The norm for such scenes is to pick up a lot of details. In this case it is shot entirely from the exterior, with one take, from the perspective of two freelance TV news cameramen.

There is an explosive shootout and one of the downed characters shatters a plate glass window. There was no budget to reshoot that prop or for interior details. The approach is stark and compelling in its minimalism.

Gilroy urged us to see the film which we did last night.

Enticed by that key scene our primary reason for attending. There was a steady and involving dramatic progress leading to that decisive moment.

Fitting the description of a low budget film it focuses on the sociopathic character of Gyllenhaal (Lou Bloom) as a smart, self educated, brutally ambitious individual with no moral compass.

He first appears as a thief fencing stolen goods. For a fancy bike he bargains for a camcorder and police radio. The hope is to film crime scenes and accident footage to sell to a local TV station.

Initially he is clueless but proves to be a fast learner. The first check is for just $250 which in his world is not bad for a night of work. He clicks with Nina (Rene Russo) a woman of a certain age who buys his work. Thinking he has potential and a good eye for news she provides guidelines for what will sell. Mostly this means crime and accidents involving middle class whites in good neighborhoods.

In the news room if it bleeds it leads.

Soon Bloom is logging an expanding portfolio of news stories on his computer.

The cash allows for purchasing a better car and advancesd camera. He also cons Rick (Riz Ahmed) into riding shotgun. The homeless man is offered a gig as an intern with the chance to develop a career. Insisting on making some money Bloom bends at $30 a night for hazardous work. It’s Rick's job to navigate the fastest route through GPS and shoot with a backup camera.

In a ruthless drive to the top Lou reveals no love or compassion for anyone but himself. Knowing that Nina is coming to the end of a two year contract as the bottom ranked TV station during sweeps period he leverages that to the hilt. For openers he demands sexual favors, serious money, and on air credit. Or, now in the game, he walks with his hot product.

While the character of Lou is fascinating and revolting Gilmore involves us in the larger issues of the nature of news as gory exploitation and entertainment.

We watch as Lou develops into altering a crime scene to get a better shot. Or charging into a home before the cops arrive to “help the victims.” A crock. A family killed in a sensational murder in a surburban neighborhood is a sensational story. The irate police demand his footage. He given them an edited clip withholding footage of the killers. He stalks them by tracing the number plate of their vehicle.

When he follows them to the late night Chinese restaurant he calls in their location to 911. He is poised to film an inevitable shootout. Rick is horrified to be drawn into an illegal stunt. Lou threatens him with physical harm if he does anything rash.

Through his antics people get killed including his sidekick who wanted half of the take. In an earlier scene he rigged an accident for a competitor that led to severe, career ending injury.

More or less all of these elements have been going in journalism since the Bible first reported on Adam and Eve.

During the Civil War photographers were know to arrange corpses to get more dramatic shots. We see Lou set up a corpse. As to helping victims news photographers are known for keeping the camera rolling. First you get the shot and then you call the ambulance.

The station leading with the most gruesome footage leads in rating.

In that sense we are all complicit. We watch.

While Nightcrawler is a grim film Gyllenhaal delivers a creepy but powerful performance. Unfortunately, his pathetic, disgusting character is all too credible.

Film live at 11. First and exclusive at Station WXYZ.