Back and Forth Twixt Philadelphia and NYC 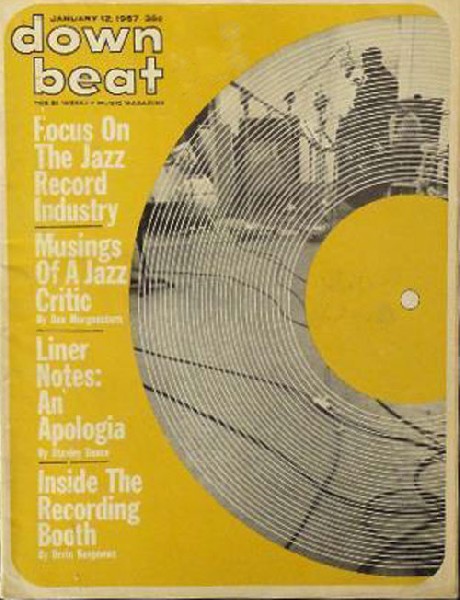 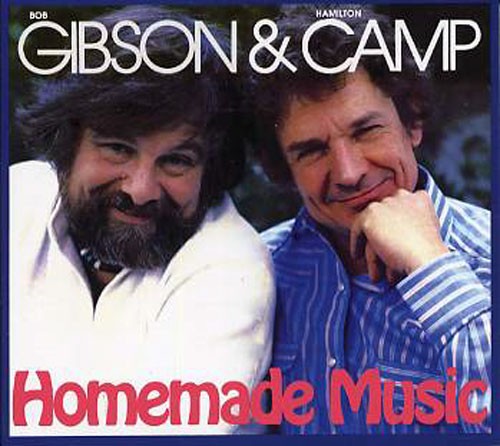 Bob Gibson and Bob (now known as Hamilton) Camp, on the cover of one of their lps 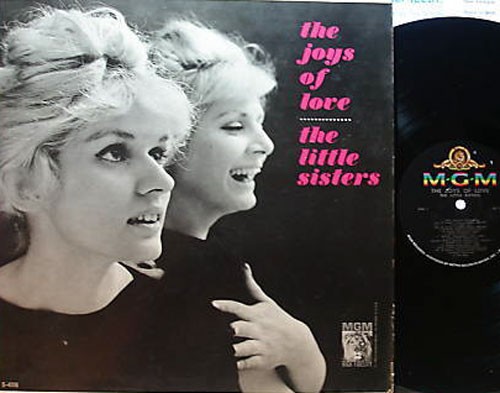 MGM released this lp of the Little Sisters, but without Richard Graham

This continues the conversation started in Part I. In the early 60’s folk music was establishing itself in several urban musical ghettos. At this point Herb is migrating back and forth between Philadelphia and New York.

Folk recordings are still a minor component of the recording industry, but that is on the verge of change as more established companies in the music industry begin to view it for its profit potential. A new kind of folk performer is beginning to emerge and more than musical boundaries are being tested.

David Wilson How did you get started in the recording industry?

Herb Gart I took on a partner, Kermit Downes, in Philly in 1962, who was a great bass player and bass singer in a jazz vocal group called The Sophisticates with whom I produced my first single “I Believe’’.

Kermit and I would go to New York and listen to acts at clubs in the Village. We didn’t find anyone together but I remember his great bass voice saying “umm umm ummm!” at every pretty girl in Manhattan.

The first album I conceived came about when I heard a Mister Softee ice cream truck singing great blues! He had hooked his guitar and a mike up to the jingle box and sang blues to draw a crowd for his ice cream. His name was Doug Quattlebaum and he played organ for Mahalia Jackson (which didn’t pay well). I had the album produced by Pete Welding, a blues expert and writer for Down Beat Magazine. I got it released on Prestige Records as Mister Softee Blues. The $800 the album cost to produce was contributed by a distant relative, Moe of Manny, Moe and Jack - The Pep Boys!

In the meantime, my friend Bob Dark from Wireless Tech and I started a tiny studio at a good location, where we recorded The Sophisticates and several others. The studio didn’t make any money but we had a lot of fun. We did live recordings at The 2nd Fret coffeehouse with one B&O ribbon mike. Really good sound.

I wish I had some of those tapes today. One was of Bob Gibson and Bob Camp which gave me the chance to meet the Arthur Godfrey star who got me interested in folk music. A few years later I met him in New York and the first thing I said was ‘’Damn! You’re short! Bob Camp is even shorter!”

Gibson said “That’s why I hired him!’’

DW It sounds as if you were starting to spend more time in the village about then.

HG I made weekend trips to the Village and spent the overnight in the Figaro Coffee House at the corner of MacDougal and Bleecker Streets.

DW I remember the Figaro from some of my trips to the Village. You never knew who you might run into there.

HG One night about 3 AM two little blondes walked into the Figaro and came directly to my table. ‘’Could we sit with you so no one will bother us?’’ Of course I said yes. Then, one of them, Mary, said “Is it ok if we practice?’’

What happened next is some of the most heavenly harmony singing you have ever heard, as fine as The Everly Brothers but very much their own way.

This singing went on for more than half an hour when a tall gangly straw-haired boy with thick glasses and a 12-string guitar came in straight off the bus. He sat at a nearby table and listened. Soon he came over and asked if he could play guitar with them.

He took out his 12-string and played along with them as if they had rehearsed together for months.

A fine guitarist, Dick Rosmini, who had been sitting at another table called me over and said “Herb, this kid is playing with the girls as if it was easy, and I want you to know that all the best guitarists in the Village have tried to accompany them including  Dino Valente, Bruce Langhorne and myself and we can’t do it. They fall in and out of modal harmonies and some harmonies we can’t name, as easy as can be and almost never the same way twice! This kid, Richard, is making it look easy!’’

Thus was born Richard Graham and The Little Sisters. Little Sisters was right. Their real names were Pat and Mary Little and they were little and as cute as buttons. As it turned out, they were also crazy.

At the Figaro we discussed signing with me and becoming successful on the folk circuit. They all agreed verbally. I point that out because I never had them sign any papers, which was a mistake - but not for the usual reasons.

I had a music director and act-stager, Elmer Jared Gordon, who produced Buffy Sainte-Marie’s first album, work with them the very next day at a rehearsal studio. After an hour he told me that they learned everything within minutes and he had almost exhausted everything he could teach them. They were amazing! We worked up a three-song set for the Bitter End hoot and an encore, just in case.

I asked my associate and friend Len Rosenfeld to come see them. What happened that night was completely unexpected. The Bitter End hoots were remarkable in those days. Anyone you could think of showed up and performed from unknowns to famous people. It wasn't easy to get on the hoot. There was a long waiting list.

However, I was able to get them a good spot in the middle of the hootenanny. They had to follow The Clancy Brothers, the powerful, entertaining, well-known vocal group from Ireland. As expected, the Clancys' brought the house down and had two encores.

Next up were my two little blondes and the tall gawky straw-haired boy. Richard was a  musician who took most things seriously. The Little Sisters were the opposite. Everything was fun. Within two minutes of their being on stage, we all learned a lot more about them.

The first song was a traditional folksong called "Honey, Let Me Be Your Salty Dog". It is a bright up-tempo song which they sang at breakneck speed.

About a minute into the song, Pat pinched Mary on the ass to the delight of the crowd. Mary pinched back and Pat's facial reaction was a riot. What happened next was impossible. They began a conversation;

"Why did you pinch me, Pat?" Mary asked.

"Well. I just thought I needed to do something to get the audience's attention." answered Pat.

Every word of this conversation and more to follow was crystal clear and spoken, not sung, while they continued to sing "Salty Dog" at breakneck speed, uttering their words between each word of the song!

Think about that for a minute! Theoretically there is space between each note to insert something - trill, an extra note. But a word - spoken, not sung?? Can't be done - except The Little Sisters did it.

Len Rosenfeld put his hand on my shoulder and said, "Herb, you've got something there - but what?"

The next song while slower-paced was still up-tempo.

Between words of the song, Mary said to Pat, 'I think we're losing them. One, two " And they both said "Three!" and lifted their skirts under which they were wearing red bloomers! The audience went to pieces and Richard Graham got red in the face.

At the end of the song Richard said "And now for our next farce". He said it glumly and the audience broke up again. The third song had more of the same and when the three song set ended the place erupted. People actually stood on their chairs and tables and screamed for more. I was standing in the audience looking at the stage waiting to see them come back for the planned encore when I noticed Mary Little standing next to me.

She looked at me and said "Do you think they liked us?"

"Get back on that stage and take your encore!" I sputtered.

A lot happened in the weeks that followed. I got them a deal with a large advance from Columbia Records and a six week gig at the Village Barn on 8th Street, which televised live on national TV every week.

To celebrate we arranged for the signing of both contracts at a dinner at the Village Barn. The girls didn't show up!

It took three days to find them. But I never saw them again… Neither did Richard.

It seems that when they were upset they got on the A Train subway and rode it 24 hours a day getting off to buy some candy and go to the bathroom and getting right back on. Aside from being crazy, it was downright dangerous.

Anyway, the reason they didn't show up is that they thought they would have to pay for their dinners and they didn't have enough money!

A few nights later after midnight I was sitting in The Fat Black Pussycat, a 24/7 coffeehouse that a lot of us frequented. Several people came up to me and congratulated me on their appearance on The Tonight Show with Johnny Carson!

Well, it seems that when Johnny Carson had an afternoon game show (Who Do You Trust) the Little Sisters were guests, so after the debacle at the Village Barn they went up to NBC at Rockefeller Center and asked at reception to see Johnny.

"We just want to say hello. Our manager had us locked into our rooms and we just escaped. Johnny knows us."

Shirley Woods, the talent coordinator, came out almost immediately. She remembered them and heard their hard luck story about their evil harsh manager.

On the spot, she got Jerry Weintraub, who managed John Davidson and Joey Bishop, as well as other Tonight Show regulars, to save them from their awful manager. They put the girls without Richard Graham on the show right away.

They were their wacky selves and were a big hit. In fact, the first words out of Mary's mouth were, "Hello Johnny. Where's the bathroom(?),”and she left Pat to talk to Johnny while she went to the bathroom for about 2 minutes.

I never saw them again. However, when I met Jerry Weintraub a year later, as we talked I said that I was an expert on the folk scene.

Then Mary had said "One of us is pregnant and we don't know which one!"

Jerry put them in a private hospital with his doctor and took good care of both of them. Once they realized that they could have friends up for steak dinners at Jerry's expense, they got in touch with a lot of their needy friends and had dinner parties almost every night. The bill came to $14,000 for meals and extras.

Eventually they put out an album on the MGM label with liner notes by Johnny Carson. The problem was they didn't have Richard Graham and they weren't as free with their harmonies. The album, I thought, was tepid at best. It could have been a great album. ("The Little Sisters: The Joys of Love" - Ed.)

Richard Graham made and repaired guitars and developed a good business before he moved to Providence, RI to help his father in the advertising business.

DW You realize, of course, that if anyone wrote that as a piece of fiction it would be proclaimed preposterous. Yet knowing you and knowing this business and those times, I have no trouble accepting it de facto.

Next Installment, Part III, Establishing a standing in the community