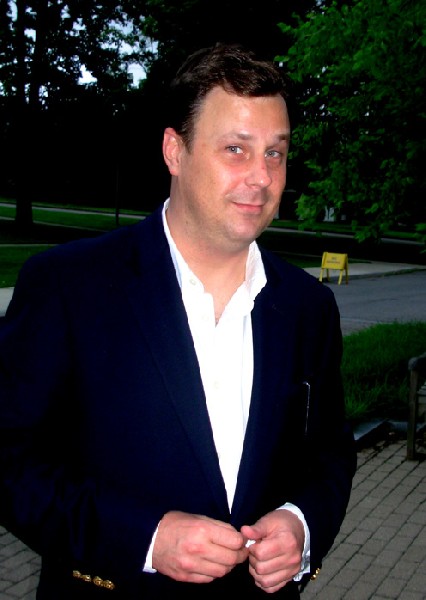 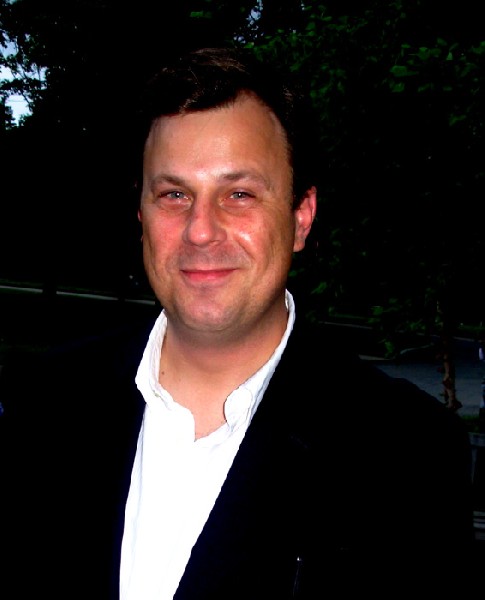 Ready for his closeup. 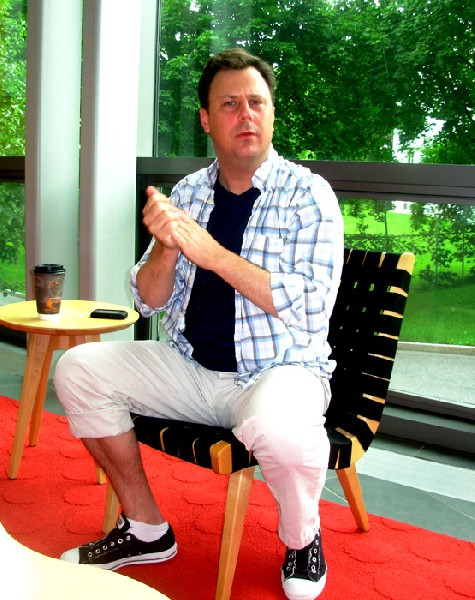 Taking a break from rehearsing "Knickerbocker." 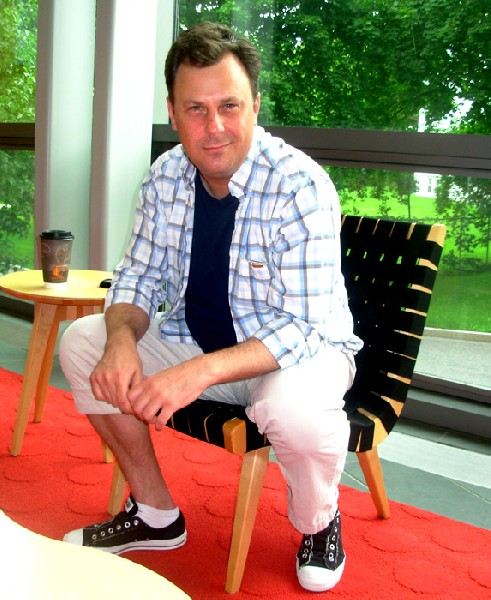 Hanging in there but what’s with the sneakers? 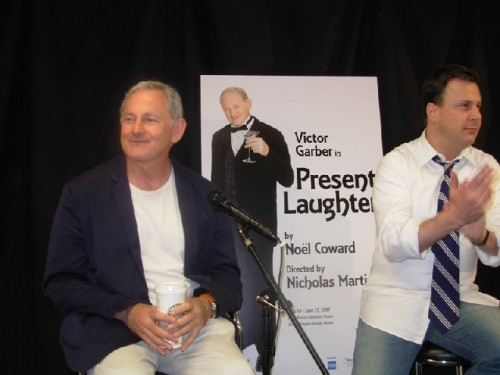 With Victor Garber in "Present Laughter." 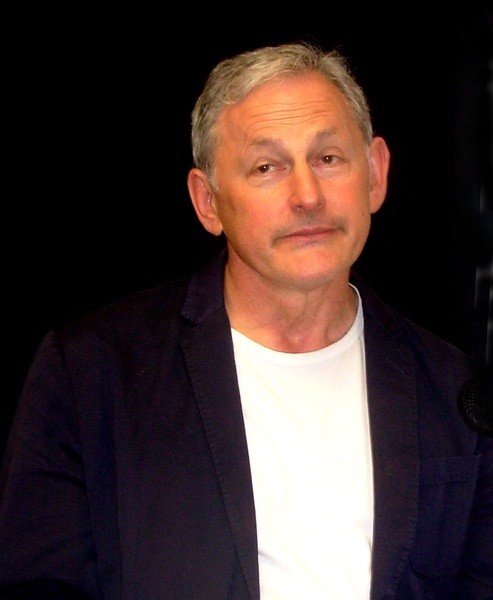 Garber in a whimsical moment. 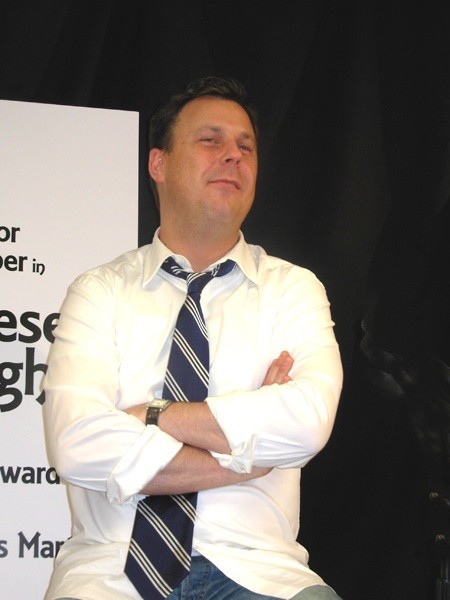 Brooks during the Huntington interview. 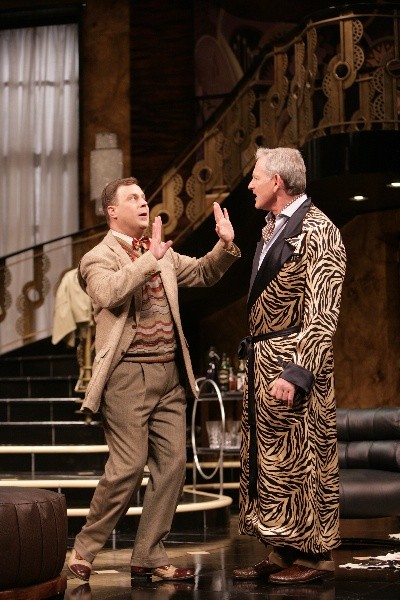 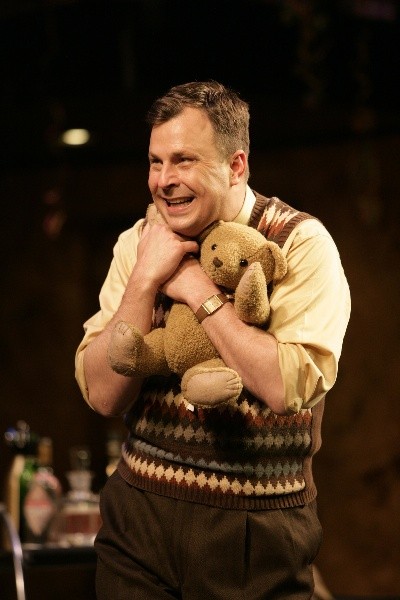 The aspiring playwright in "Present Laughter." 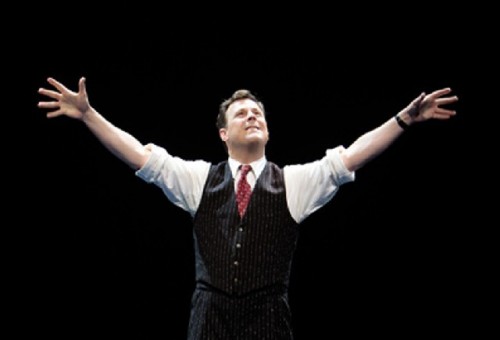 Playing the lead in "She Loves Me" at the Huntington as well as WTF.

Taking a break from rehearsing Jonathan Marc Sherman's "Knickerbocker" which has its world premiere on the Nikos Stage of the Williamstown Theatre Festival this week, we found Brooks Ashmanskas to be amusing and feisty. He is a funny guy with a sharp edge. He likes to jab and use his elbows under the basket when the ref, me I guess, isn't looking. But all in good fun. He conveys a take no prisoners approach to life in the theater.

Coming straight from two hours in a dentist's chair and two root canals, ouch, I had no idea it would be Breakfast at Wimbledon. Brooks was slamming aces while I struggled to hang in. Between rounds the cut man in my corner worked on me. .

As I scribbled notes, which seemed to Brooks to be some kind of gibberish, he slammed a head shot. "Where's your tape recorder? You're missing great stuff. I'm giving you the gold," he said. Well, no argument. But I'm old school gonzo journalism. We go for the flavor, hang in, toe to toe, eyeball to eyeball. I tried to explain it to him but he was zinging off somewhere. You know, this is just a bit of show biz pitter patter. Hype for the show. Talk it up and sell some tickets. Not like interviewing Obama for 60 Minutes.

In January Ashamanskas is headed for Broadway in Noel Coward's "Present Laughter" with Victor Garber and Pamela Gray. It is a restaging of the Huntington Theatre Production that again will be directed by Nicholas Martin. In 2007 Brooks earned nominations for Drama Desk and Tony Awards for best featured actor in a musical "Martin Short: Fame Becomes Me." Other Broadway credits include "How to Succeed in Business Without Really Trying" "Dream" "Gypsy" "The Producers" and "The Ritz."

But getting him to talk about those Broadway productions hit a dead end. "Look it up" was a frequent refrain. During a brief earlier meeting in the lobby last week I reminded him that I had reviewed several of his shows "Present Laughter" "She Loves Me" and  "A Flea in Her Ear." That was met by "I never read reviews." I reminded him of that interview with Garber and Gray in Boston. Again, no luck. Probably he won't read this either. Hey man show biz can be tough. Or, as a mentor told me "Charlie, in this business yah gottah have elephant hide."

Don't get me wrong. I like Brooks and respect him as an artist. He really is a funny guy. I was laughing my ass off getting back up from another zinger. Truth is he is just as tough on himself. It's just a way of looking at the world. Maybe that's what it takes to survive. Nobody says this stuff is easy. But you learn to roll with it, bob and weave, let it slide by. Hang in and take your cuts. Nobody hits a home run every time.

The safe turf is to talk about the current show. It seems that "Knickerbocker" is bringing together a group of Bennington College alumni. Brooks, class of '91, had Nicholas Martin as a professor. This production reunites him with the playwright Jonathan Marc Sherman and scenic designer Alexander Dodge. He described being "Back in the neighborhood" and that he had remained close with Sherman and Dodge since college. He said that he can't speak for Bennington today but when he attended there was a great faculty of working artists stating "I got a lot of attention."

We asked about his relationship to Nicholas Martin. "It started as teacher student, then as mentor, and quickly as friend. I worked with him almost all of this year." After Knickerbocker in September Martin will direct him in "She Stoops to Conquer" at the McCarter Theatre in Princeton, New Jersey then on to Broadway in January. Last summer he did two WTF productions including the lead in "She Love Me" which Martin took with him from the Huntington, as well as, the farce "A Flea in Her Ear.".

Taking a breather I asked how he pronounces Ashmanskas? He did. "What is that I asked?" Which, I guess, is a lame question. By now I was down in the count and dropping like a stone. "Lithuanian" he said tersely. "Why didn't you change it to something like Joe Smith?" says I. "Too masculine" says he. Then added that, early on, a potential agent asked him to change to something like "Ash" or "Ashley." But, what's in a name? A rose by any other nameÂ… "If you are famous enough people know how to spell your name" I said. "Like Carl Yastrzemski." "The Yaz" he said  Or Giuliano, for that matter. People make a mess of my name and nobody can spell it. Bummer. Guess that's the price of being almost famous or not famous enough.

Among the four productions that Ashmanskas worked on with Martin this year was Christopher Durang's "Why Torture Is Wrong and People Who Love Them" at the Public Theatre for which he did the choreography. Choreography? Having identified the play he said "Look it up." I did. Here's a quote from an April 7, review in the Times by Ben Brantley "Yet 'Torture,' directed with just the right balance of crudeness and finesse Nicholas Martin turns such scenes into occasions for one of the most releasing forms of laughter: the kind that encourages the spewing of the anger, fear and helpless indignation that build up in anyone who still reads or watches serious world news."

Brooks said that "I started as a dancer when I was very young but I wasn't disciplined enough." He does however continue to have remarkably nubile and limber movements on stage. There is a lot of physical comedy but he worries about his weight and keeping in shape for another run on Broadway this winter. Is that what you are, I asked, a song and dance man and comedian like in "She Loves Me?" He differed with that stating that while the play has amusing and funny aspects he didn't see it as Musical Comedy so much as Musical Drama. "If you have to pigeon hole me then yes I have played a lot of comic parts. 'Knickerbocker' is funny but also simple as well as complicated and beautiful."

We asked how he came to work so much with Martin? "Early on you surround yourself with friends who you get along with. You work with your friends. I work with Nicky because he is my friend and we have a similar sense of humor." That sounds like a repertory company I commented. "It is. That's what you strive for. On Broadway you work with the same directors a lot unless they hate you."

One of those friends is Victor Garber. "We have known each other for 20 years but this is the largest production we have worked on. 'Present Laughter' is the same production we did at the Huntington. Right from the beginning there was talk that we were going to Broadway and now it is happening. There is a great set. A great set."

I commented on the superb production values of the Huntington and WTF. It is as close as one comes to New York standards for regional theatre. "It ups the ante and that's why you get great people that want to come and work with you. This is professional theatre and this will be my fourth season with WTF." Last summer he appeared in two shows and this year just one but he will stay around as an MC for the Cabaret. After which he is off to Ithaca to choreograph a play for the Hanger Theatre. Then it's back to New York where he was fortunate to purchase a "great apartment five years ago."

Although he had described Martin as a mentor and friend I wanted to know more about their working relationship. How had that changed because of the stroke Martin suffered last September. The response, some over the top humor, surprised me. It is best not to quote it out of context. Perhaps because Brooks is so close to Nicky the irony was a way of deflecting reality. He described being there in the hospital the day after the stroke and how he is learning to cope and carry on. "It is astonishing that he continues to work. He is figuring it out." Perhaps what makes working possible is rooted in those close relationships and a deep understanding of what he wants from a performance. I asked about that. "Nicky is one of my closest friends. He is my New York mother."

Coming into his 9th Broadway show (another "Look it up") he is really excited about the buzz. There never seems to be enough Noel Coward. Last summer there were two Coward productions in the Berkshires and one at WTF the year before. I mentioned "Blithe Spirit" on Broadway this past season with Angela Lansbury. But it came out as "Blythe Danner." Perhaps all that Novocain was doing something funny to my brain. Brooks jumped all over that. "Blythe Danner the solo show, she sings, she dancesÂ…"

Once again I staggered back to my feet. They put the stool out in the corner, The cut guy worked on me, some smelling salts, and I was ready for another round. What is it about Coward I asked, recovering gamely? He stated about Coward "He's smart and patient. He takes his time. They don't write them like that anymore. It's so sophisticated with the cigarettes and martinis. We all wish we lived in England like that with lots of money. Coward captures that glamour which we all aspire to. The play is about a family in the theatre with a famous actor and me as an aspiring playwright who wants to hang out with him." It was wonderful at the Huntington and is sure to be a hit on Broadway.

Have you done any movies? I braced myself for another "look it up." It was a relief to learn that "I have one film. 'Julie and Julia' which is about to be released. It's by Nora Ephron." Yeah, I looked it up and it stars Meryl Streep as Julie Child the first TV chef. It seems that he was on the set for just one day but commented "I can't wait to see how fat I look."

By then it was time to get back to rehearsals. "That should be enough" he said. Yeah, more than enough. A TKO. "No mas."

Knickerbocker
July 8 - 19, 2009
Nicholas Martin will open the Nikos Stage season, directing the world-premiere of Knickerbocker by Jonathan Marc Sherman (Women and Wallace, Sophistry).  "Are you ready?" The question looms over Jerry as the months tick by and his unborn son grows from the size of a peach to the size of, well, a baby. As the birth date creeps ever nearer, will the advice, encouragement and warnings of friends and family make Jerry more or less ready? The awe and terror of becoming a new parent shines through Sherman's newest play as he examines whether one can ever truly be ready for parenthood.